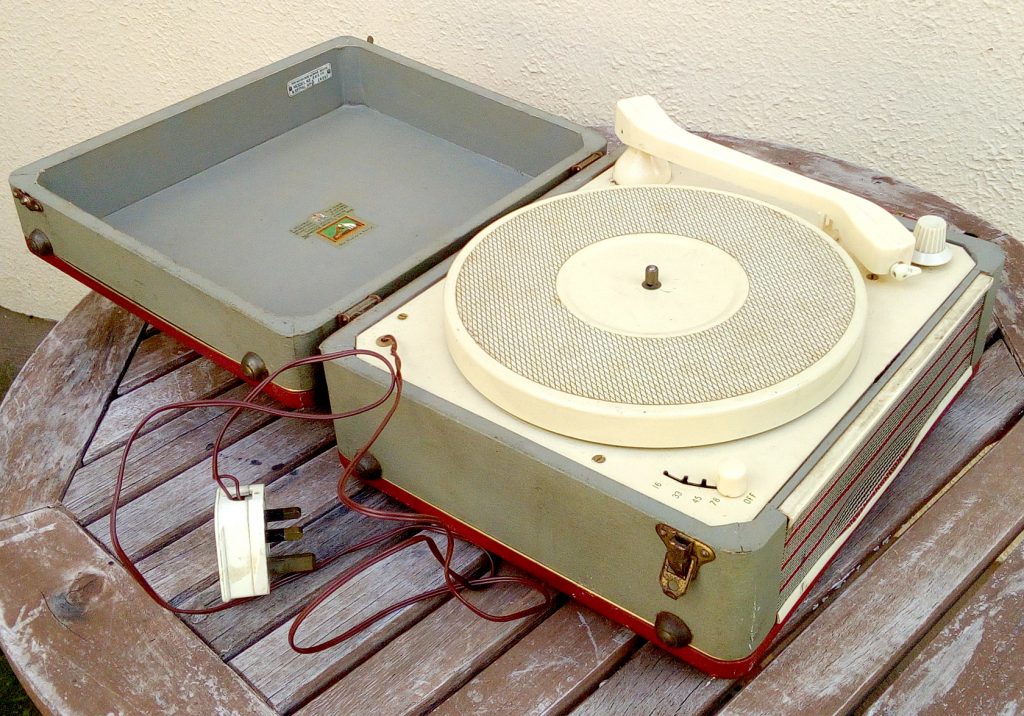 I was surprised to see this in the local animal welfare charity shop. I thought it looked too large to be an attaché case radio and too small to be a record player. Though it was styled like many 1950s UK attaché case radio models.

Opening it revealed it was a record player. I was also surprised at the lack of hits online doing a search. The most similar model is the HMV RE.11.AM which might have replaced it. It’s not on the Trader Sheets or R&TVS. The 2006 and 2008 are listed in R&TVS, but though they are record players, they are later. The 2006 seems later and more advanced than the 2008 as it’s an optionally stereo, transistor model.

The wires had been pulled off the pickup. The stylus arms were bent around the tip of the cartridge. Connecting the ‘scope revealed that the cartridge is working, so I removed it, pulled off connectors, cleaned the green corrosion of the pins and straightened the strips holding the styli. I re-soldered the cable to the clips with them still off the cartridge as soldering heat can damage it. The arm tracking weight spring was in the end hole of the retaining strip, so I moved it midway for now as that would have been greatest loading.

The dual 32 + 32 µF capacitor tested fine for leakage at 32V and discharged slowly on the PSU meter. The 3.3 kΩ main dropper resistor was fine.

The 100uF 10V two piece plastic case Plessey capacitor on the cathode resistor was dried out and replaced with a 35V 106 °C 100uF part. There was also a 0.1 µF paper dielectric capacitor on the screen grid to chassis with an associated 4.7 kΩ series resistor to HT. It was leaky and replaced with a 630V polyester type. The chassis end of both original capacitors was left connected.  The selenium rectifier was left in place and a 4 way screw terminal block used its pins to mount a 1N4007. No additional series resistance is needed in this design.

The 1nF 1 kV paper dielectric capacitor between the electrical chassis, which could be either side of the mains, and the main turntable base was snipped where it connected to the chassis end of the volume control. This didn’t have R3, 1.5 MΩ, but did have a simple loudness feature implemented by a 220 pF silver mica capacitor between input and output.

Powered on. Nothing, not even hum. The HT was OK and the UL84 heater was glowing. A known good one was substituted, but there was no change.

The nut driver is needed to take out the two retaining nuts. Examination revealed that the cathode and grid pins where bent and soldered together!  Strange. The solder was removed and pins bent apart. The input screened cable then needed reconnecting to the grid pin. There is no grid leak resistor or series capacitor no doubt to save two parts and the bias is set by the cathode resistor.

Now it badly played the 78. The volume control was strange. Fixed by spraying in some WD40 at the terminals, it dries to leave a thin wax film, which is why it’s a bad lubricant. The speed issue and noise from the platter was due to the idler being totally perished.

I tried supergluing a synthetic O ring around it as the actual diameter isn’t critical. But it made it too fat. Then I remembered I’d dismembered a cheap scrap Currys reel to reel taperecorder at the same time as restoring two others. Could one of its idler wheels fit?

It was like in new condition despite the heads on that machine being badly worn away. The thickness seemed OK as did the diameter. Perhaps a shade thicker, but the poor condition made it hard to tell.
The original had two metal shim washers and a fibre washer under it. Moving the fibre washer to the top made the edge match the speed steps on the motor shaft. The internal diameter and boss height was the same!

Now it played 33, 45 and 78 perfectly and the noise was gone from the platter. No doubt the two styli are sapphire and worn, but it depends how much it was used.

It’s not very loud, but I don’t know if it’s due to having only a single UL84, a worn out cartridge or the 160V HT. There is no voltage adjustment. Our mains is typically about 230V here in Ireland, but most English people I know seem to have a little more than 240V. The other UL84 is loud in the radio and is not actually as loud in the record player. However it sounds quite good for such a simple turntable and amplifier.

Grid
An intermediate electrode between the Cathode (or Filament on a direct type) and the Anode (Plate). Types of grid include "Control" (g1) which controls the electron flow, "Screen" (g2) which is an electrostatic screen between Anode and Control grid improving RF performance, "Suppressor" (g3) which suppresses secondary emission between the Anode and Screen grid. The Control g1 is usually more negative than Cathode, Screen g2 is usually at a higher voltage than Anode and Suppressor g3 usually at Cathode voltage. Physically the grids can be helical fine wire, a mesh, rods, plates. Rods or Plates need an electron beam.
Cathode
The source of electrons in the device. if "indirect" then the cathode is tube with an internal insulated heater. A filamentary cathode is a filament heated by voltage across it which acts as the cathode.