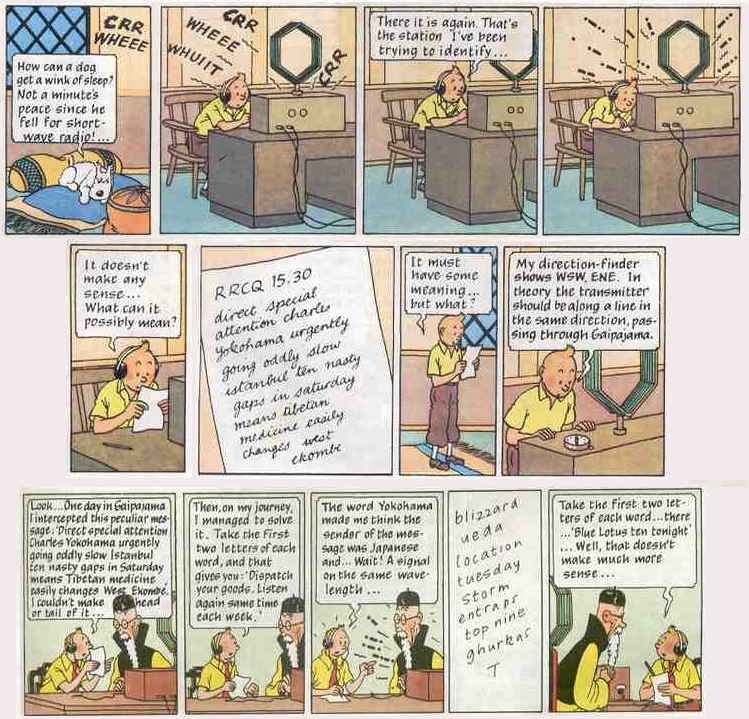 We’ll call this 1 valve Regenerative Radio “The Hergé” in honour of his research and attention to detail. (fun stories too)

Hergé wrote that strip (in French) for the Belgian newspaper in 1934 or 1935 just after the Japanese invaded China and blew up the Manchurian Railway.
Tintin is picking up Japanese transmissions to/from spies in China in Morse.
Note DF loop aerial.

The Japanese lodged a protest with the Belgian Embassy after it was published!

It was later coloured and published in English as “The Blue Lotus”. You can buy the full story in most bookshops and online.

You can wire it for LW, MW or SW, or fit a switch for two bands or more.

Unusually much of the wiring will use plastic screw terminal blocks.

The actual  radio “front” is regenerative Tuned Radio Frequency (TRF), The regenerative feedback (using coil labelled Yellow & Blue) cancels out losses in the tuning circuit thus making the tuning sharper and signal stronger. Too much feedback and the circuit is a small MW transmitter!

Early version of radio. Current version is a little different.

No external aerial or earth required.

Note that higher voltages are dangerous, especially above 50V. There is also risk of fire and burns or even explosions if NiMH are used to make higher voltage packs.

This valve concept  was invented in 1950s but many models only entered production in early 1960s and used up to 1980s in MIG fighters and portable Military radio. Superior frequency response to many Germanium transistors (120MHz vs 3MHz), more stable, high impedance lack of Silicon Transistor production is many the reason for long term use. No recorded Domestic/Consumer application.

Heater filament power is from 12mW to 50mW depending on model compared with 2000mW for typical US/European domestic valves (tubes). Recommended HT typically 45V (max 60V) to 150V for 4W “transmitter” versions. But operation at 16V upwards is definitely feasible. Apart from the 4W models, the valves are so low power that in some application circuit the power consumption is similar to transistors and the valves can be mounted direct on PCB or stripboard (veroboard). The 1j37 is unusual as although it has single anode it has dual control grids at the same place. Read the Radio Museum article to see how this is possible. Regular valves with a single anode and cathode can’t be made like that. It is like a dual gate depletion mode cascode MOSFET. (A pentode with suitable voltages on the 3 grids behaves like cascode circuit. I think the 1j37b is a pentode with a 2nd identical control grid, not a hexode)

Do not exceed filament)”>filament)”>1.2V filament. These are not 1.5V filaments. For NiMH battery which is a bit more voltage than a NiCd, a 10 Ohm series resistor gave about 1.17 to 1.2V on filament.

Grounding the Anode and using G2 as anode with 42V HT operation as a Colpits oscillator up to 100MHz is possible. So using it as a triode is possible,